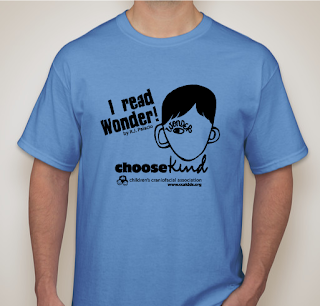 Today's Friday Remix is a review of Wonder that you may not have read before.


Facing Up to It

Born with several genetic abnormalities, 10-year-old August Pullman, called Auggie, dreams of being “ordinary.” Inside, he knows he’s like every other kid, but even after 27 surgeries, the central character of “Wonder” bears facial disfigurations so pronounced that people who see him for the first time do “that look-away thing” — if they manage to hide their shock and horror.

“Whatever you’re thinking, it’s probably worse,” he says of his face as the book begins. He’s used to the stares and mean comments, but he’s still terrified to learn that his parents have gotten him into middle school at Beecher Prep and want him to go there rather than be home-schooled. But they persuade him to give it a try — and by the time this rich and memorable first novel by R. J. Palacio is over, it’s not just Auggie but everyone around him who has changed.
Stories about unusual children who long to fit in can be particularly wrenching. At their core lurks a kind of loneliness that stirs primal fears of abandonment and isolation. But Palacio gives Auggie a counterweight to his problems: He has the kind of warm and loving family many “normal” children lack. Among their ­— and the book’s — many strengths, the Pullmans share the, um, earthy sense of humor that all kids love. Over the years his parents, Nate and Isabel, have turned the disturbing story of Auggie’s birth into high comedy involving a flatulent nurse who fainted at the sight of him, and they persuade him to go to Beecher by riffing hilariously on the name of the school’s director, Mr. Tushman. It also helps that the Pullmans’ world — they live in a town house in “the hippie-stroller capital of upper Upper Manhattan” — is the privileged, educated upper-middle class, that hotbed of parents who hover and micromanage the lives of their perfectly fine children. It’s somehow weirdly satisfying to see what happens when something actually alarming enters this zone of needless anxiety. Palacio carves a wise and refreshing path, suggesting that while even a kid like August has to be set free to experience the struggles of life, the right type of closeness between parents and children is a transformative force for good.
But it’s Auggie and the rest of the children who are the real heart of “Wonder,” and Palacio captures the voices of girls and boys, fifth graders and teenagers, with equal skill, switching narrators every few chapters to include Auggie’s friends and his teenage sister, Via, who wrestles with her resentment, guilt and concern. “We circle around him like he’s still the baby he used to be,” she observes ruefully. And we see the vicious politics of fifth-grade popularity played out as the class bully targets Auggie and starts a campaign to shun him, culminating in an overnight school trip that turns scary and shuffles the social deck in ways no one could have imagined.
While I sobbed several times during “Wonder,” my 9-year-old daughter — who loved the book and has been pressing it on her friends — remained dry-eyed. She didn’t understand why I thought Auggie’s situation might upset her. “I like kids who are different,” she said. I realized that what makes her cry are stories in which children suffer because they have missing or neglectful parents and no one to take care of them. Perhaps Palacio’s most remarkable trick is leaving us with the impression that Auggie’s problems are surmountable in all the ways that count — that he is, in fact, in an enviable position.


Maria Russo is a frequent contributor to the Book Review.
http://www.nytimes.com/2012/04/08/books/review/wonder-by-r-j-palacio.html?_r=1&