I love this Media Monday post from the Franklin Sun Journal. Not only is Camryn Berry an amazing individual and inspiration, but her method for presenting to a classroom will inspire and empower you to do the same! If you do decide to make a Wonder presentation, let us know and get more information here.

You'll love this terrific article from Barry Matulaitis. Below I've included some of my favorite parts and bolded great ideas for classroom presentations. 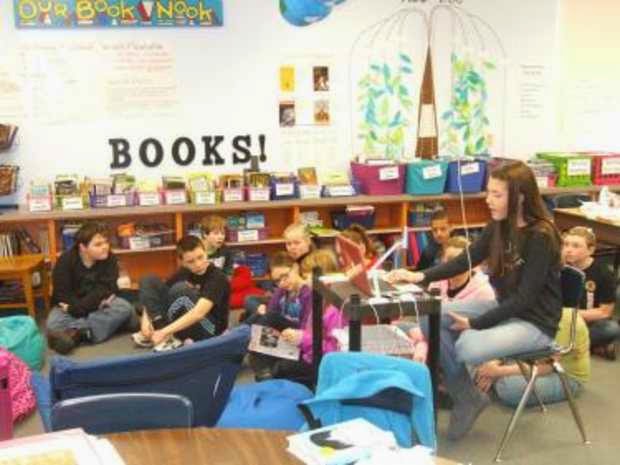 LIVERMORE  –  If the choice is being kind or being right, which one would you choose?

That was the question posed by Spruce Mountain High School freshman Camryn Berry to Janet Ventrella's fifth grade class at Livermore Elementary School on Feb. 27. Berry, who suffers from fibrous dysplasia, gave a presentation to the students about her struggle with the disease and how it has affected her and her family.

Friday, Feb. 28 was Rare Disease Day. Berry explained that rare diseases are those affecting less than 200,000 Americans, such as fibrous dysplasia. The disease is an abnormal bone growth where normal bone is replaced with fibrous bone tissue.

Berry told the class about all of her hospital trips, scans, surgical procedures, transfusions, and medications. Her journey began on July 30, 2005, when her mother, Tammy discovered a hard lump on the roof of her mouth. A CT scan was done, and x-­rays as well, to determine what was wrong with Camryn.

“Have you guys had x-­rays?” she asked the class.

In one of the slides that Camryn showed, she was in a hospital bed with a teddy bear. One of the students asked if the bear had to have surgery as well. “We had to put an ice pack on the bear, too,” said Tammy.

The class learned that fibrous dysplasia isn't a form of cancer, but it is very rare and has no cure. Camryn's tumor was the size of a baseball, and she handed the students a baseball to give them some perspective of the size.

Before the presentation, the fifth graders had read “Wonder,” by R.J. Palacio. In the book, the main character, Auggie, who has a craniofacial abnormality, receives a standing ovation after winning a medal for strength and courage at the end of the school year.

***
Camryn remembered the time an adult asked her “What's the deal with your face?”

“It  hasn't been that much of an issue with bullying,” she added. “I just think that some people aren't aware.”

***
In spite of all the hardships Camryn has had to deal with, there have been many positive moments as well. She recalled how much she enjoyed the art and music therapies at one of the hospitals she was at. Camryn has gone to Children's Craniofacial Association retreats, for children with facial conditions, and made new friends. While she was there, she went to an aquarium and saw a magician, among other activities.

On June 28, 2013, she and her family attended one of the retreats and all of the children got together to make a standing ovation video for R.J. Palacio. At the retreat, Camryn met Spencer Kane, an actor/singer for an anti-­bullying campaign inspired by Wonder. Later, he interviewed her as part of the campaign. His motto: “Be one of the Kind.”

She said that she loved going to Hole in the Wall Camp, for children with medical problems, and made many friends there as well.

Last year, a group of girls from Canton, Georgia that have a book club called The Princess Generation contacted the Children's Craniofacial Association after they read the book. They learned about Camryn and what her favorites were. One Direction is her favorite band and the girls in the book club gave her a standing ovation in the video with the One Direction song “What Makes You Beautiful” playing in the background. At the Dempsey Center in Lewiston, Camryn did a photoshoot with a mask she created not to cover up the tumor, but to celebrate it.

“After all, it is part of what makes me me” she said. “It's taught me how generous and supportive people can be.”

Camryn attended Livermore Elementary School, and Ventrella remembered her in class. “When I had Camryn in fifth grade, she was so positive,” she said. “Look at everything she's experienced in her life. She's so positive today. Making that connection with Auggie today was really important.”