Standing Up to Cyberbullying

CCA wants to make the world a kinder place.
One way we accomplish that mission is to prevent and end bullying, in schools and online.
Unfortunately, many of our CCA Alums & Adults are familiar with bullying tactics and have been bullied by classmates, peers, and even adults. Today's post is a personal account of how CCA Adult Frederick Seitz handled a bullying situation.
Stay tuned this week for informative, inspiring posts about living life beyond bullying.
Together, we'll #EndCyberBullying through education, empathy, assertiveness, kindness, and courage. 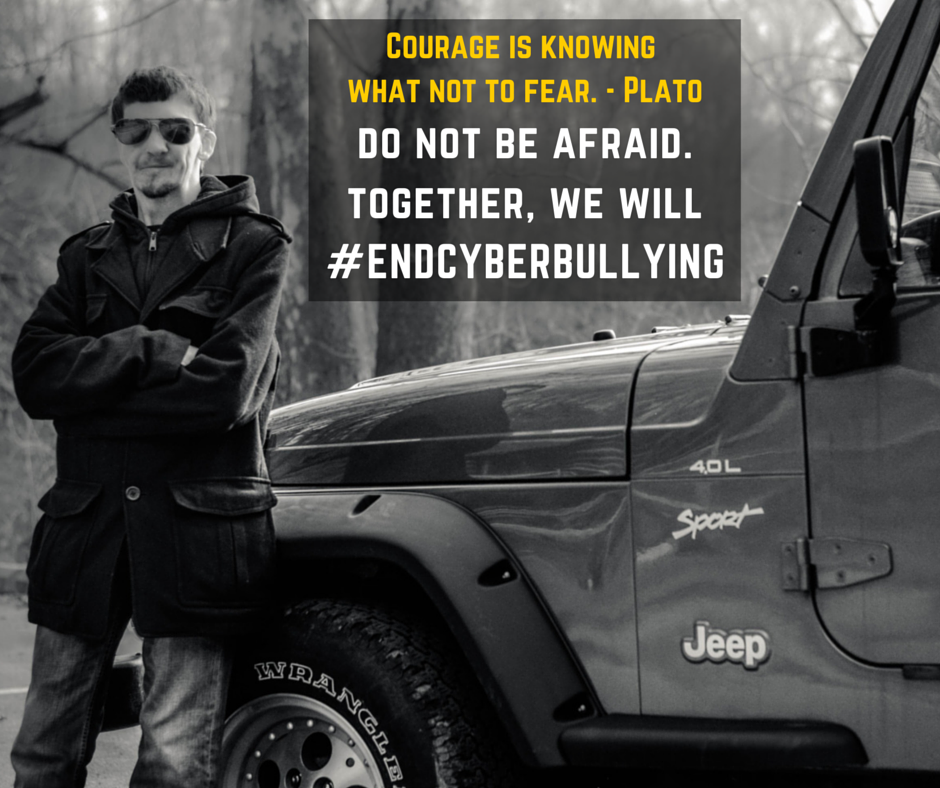 Be Ruthless to #EndCyberBullying
by Frederick Seitz

Little over four years ago, in the September of 2010, I bought my first car -- a 1999 Jeep Wrangler Sport. I saved up a lot of money from my birthdays, holidays, and special occasions over pretty much all my life up to that time. I was in my senior year of high school at the time. I was thrilled to show it off to my friends, classmates, and family. Little did I realize that only a week later, I would become a victim of cyber bullying on Facebook.

A female classmate wrote a Facebook post that didn't mention me by name directly but described attributes that people knew were only related to one person: ME. I don't remember her exact words but the post mocked my disabilities including my craniofacial difference, my deafness, and even my religious beliefs. It was clear to me that she was extremely ignorant of my true abilities and of the fact that deaf people can really do anything EXCEPT physically hear sounds. She mocked my ability to drive and went far to question why I even have a driver’s license.

Unfortunately for her and lucky for me, her post backfired completely on her.

Soon, dozens of comments from my classmates posted, all rallying behind me as they called her out for cyberbullying me. I remember reading the comments and I was surprised at how many people were defending me. That time was one of the times I learned who my real friends and allies were. The next morning after I learned of this harassing post, I brought a printed-out hardcopy of it to the principal’s office. It wasn't long before the word went around most of my other classmates about this disturbing incident. Shortly after this, I confronted this female classmate face-to-face and told her that I knew what she wrote about me.

What happened next proved what I suspected to be true: she claimed that she thought my deafness and my craniofacial difference would impair my ability to drive.

Honestly, her excuses enraged me. How could she - how could anyone - believe this about me?
However, I used this event as an opportunity to set the record straight in front of my peers and to understand what motivated her actions.

I was proud of my ability to save money from hard work and a generous family, which I am fortunate to have, and I was insulted that she would publicly belittle me and assail my abilities, when I am clearly thriving in this world.

Whatever motivated her actions: envy, insecurity, or anger, I knew that her issues did not have to become mine. Responding to cyberbullying takes courage and empathy, assertiveness and ruthlessness.

To respond with ruthlessness means:
Do not show them that you're afraid, ever.


That's how bullies control you: fear. But beyond your fear, realize that two common reasons people bully are out of ignorance and for control. You can correct the ignorance through empathy and education and you can remain in control of the situation by choosing to be courageous and assertive.
Rely on the people who come to your defense, too, for they are your true friends and allies. Remember that.