Today on the blog, we are so excited to present a recent newspaper article feature Nick Wiese from Pennsylvania, who is a member of our CCA Adults & Alums committee. Nick serves as Treasurer of the committee and has been helping CCA get the word out about our programs and services for children and adults affected by facial differences. We're so glad Nick has been featured and we're happy to share this story today! 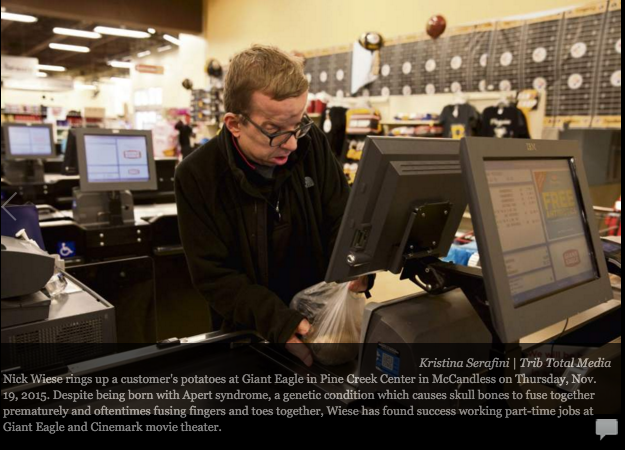 Marshall resident does not let genetic condition slow him down

Nick Wiese is anything but ordinary, although most days he wishes he was just another face in the crowd.
Wiese, 26, of Marshall, has Apert syndrome, a genetic condition that causes skull bones to fuse prematurely, preventing enough room for the brain to grow properly.
“I kind of wish I was like everyone else. I wish I didn't have the disability I have. It's a very unique life,” he said.
Yet Weise does not allow his condition to stop him from holding two jobs, bowling and speaking out against bullying.
Only about one in 65,000 babies is born with Apert syndrome, according to the National Organization for Rare Disorders. There is no known cure. The disorder has caused his fingers and toes to fuse together. Wiese has five fingers, including two small thumbs. All four fingers on his left hand are fused together.
As a cashier at Giant Eagle in Pine Creek Center in McCandless, Wiese notices when children and adults stare.
“I try to keep my composure,” he said.
And he does not let it impede him from scanning cart-loads of groceries, handling fists full of coupons and cash, and bagging items. 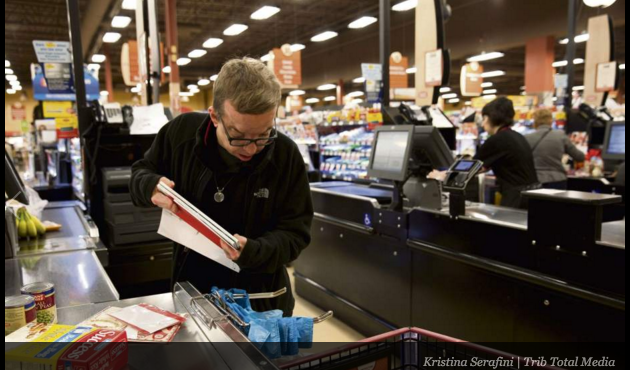 Giant Eagle's Front-End Team Leader Susan Joyce, 55, of Brighton Heights, is amazed by Wiese's abilities.
“I don't know how he does it. Do you know how difficult it is to open those plastic grocery bags?” she said.
A little farther up the road, Wiese works part-time at Cinemark Theatre at McCandless Crossing, where he works up to 24 hours a week as an usher.
“Nick is great with customers. We put him in one of our most exposed positions. For an hour at a time, he greets people as they come through. He does everything we ask him to do, including moving from theater to theater to pick up (trash) following each show, check restrooms and keep them in order. He's an all-around great kid,” said General Manager Sam Geraci, 44.
In his spare time, Wiese advocates for children with Apert syndrome, and serves as treasurer for the Children's Craniofacial Association, a national, nonprofit organization based in Texas that addresses the medical, financial, psychosocial, emotional, and educational concerns related to craniofacial conditions.
He also has appeared as a guest speaker at Ingomar Elementary School in the North Allegheny School District, where he speaks out against bullying.
“I tell the kids my life story and how I was bullied and how it felt. To me, doing that is pure joy because it lets kids know they're not alone, that someone has gone through what they might be going through,” he said.
Wiese is active in sports, too. As a bowler, he has won one gold and two silver medals in the Special Olympics.
“I have to bowl with two hands, but I use a normal bowling ball that I purchased. I have my own pair of bowling shoes with velcro,” he said.
He also enjoys horseback riding and volunteers as a side walker for a local therapeutic horseback riding organization.
Wiese has undergone seven surgeries and five medical procedures since birth, including plastic surgery and interventions to relieve breathing problems. He had to take speech, physical and occupational therapies from preschool through his high school years.
In 2007, he graduated from North Allegheny Senior High School.
He is looking forward to moving out of his parents' home and into his own apartment in the coming months, where he can enjoy his independence and do his own cooking and cleaning.
“I'm still working on my cooking,” he admits. “It's mostly microwave dinners, but a few days ago I made my own banana pudding bread.”
“I wouldn't put this life on anyone,” he said. “But still, I'm truly blessed.”
Laurie Rees is a freelance writer for Trib Total Media.
Read more: http://triblive.com/neighborhoods/yournorthhills/yournorthhillsmore/9475311-74/wiese-condition-apert#ixzz3uJpIs1Ow