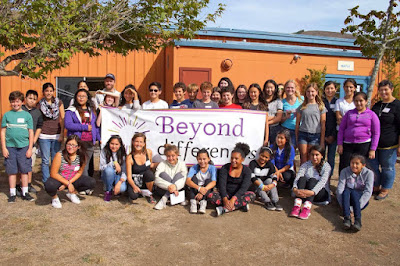 September marks Craniofacial Awareness Month, and the  beginning of the school year for many families. This post from April 4, 2016, focuses on acceptance of differences at school for all kids, but especially for those with facial differences.

For elementary and middle school students such as Auggie, the main character from the best-selling novel, Wonder, the thought of going to school each morning fills them with dread and anxiety – not because of the classroom work, but because of the social environment.

In the United States, young people spend half of their waking hours in school. Lunch and recess give students a way to break up the day, socialize and recharge before going back to class. But, for some students, especially students who may have differences or have fewer social skills than their peers, lunch and recess are hardly a time to unwind. It is a time to dread.

The social pressures of the playground and the lunch table combined with a students' social status redefined on today’s digital play ground, can make lunchtime more stressful than academic work itself.

Parents can play an important role:   they can become advocates by bringing to their child's school a new focus on the issue of social isolation including the programs Beyond Differences offers.  School counselors, teachers, and administrators are all likely to be interested in this important and burgeoning crisis of adolescence.

Educators can also play an important role: teachers can and typically are "the wise ones" who brings Beyond Differences’ national awareness days - for example, the popular National No One Eats Alone Day -  to their students along with utilizing Beyond Differences’ teacher’s guides which offer programs and activities to help students become leaders

We now know that social isolation is often the precursor to bullying. Socially isolated students do not have anyone to sit with at lunch, no one to play with at recess, and often find themselves alone at a crucial time for adolescent social development.  According to a 2013 research study on children and social isolation, negative health consequences can be serious and include increased risk of heart disease, sleep disturbances and obesity

Imagine a middle school with endless social opportunities for every child regardless of how a child looks, what they eat, or their family’s socio-economic status. Imagine one where students always have someone to sit with at lunch. One where no one was left out.  As ambitious as it seems, Beyond Differences is committed to empowering youth to end social isolation

Bring our next national awareness event -- Be The One Day -- to your child’s middle or elementary school on April 22, 2016.  Visit joinbetheone.org and see how exciting this special event can be for your child’s school.  We adults may not have had the benefit of Beyond Differences when we were growing up, but our children do and it’s time to take advantage of these student-led, original, and fun student programs to end social isolation today.