From the Bench with Francis:Metabolic Stress and Cell Death in Treacher Collins Syndrome: A Promising Target for Future Therapeutics

From the Bench with FrancisA regular column on craniofacial news and technology by Dr. Francis Smith

Treacher Collins syndrome is a disorder of embryonic craniofacial development resulting from mutations in the gene TCOF1, the gene responsible for 90% of cases (more recent research has revealed two other genes implicit in TCS: POLR1C and POLR1D, which cause a minority of cases). 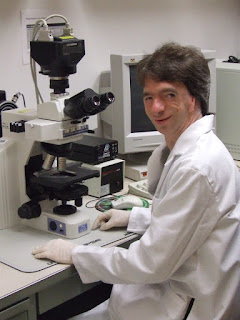 Over the years, scientists have dug deeper into the mechanism underlying the syndrome—the massive apoptosis, or cell death, in the population of stem cells (called neural crest cells) that are critical for formation of craniofacial bone and other tissues.

Investigation of the mechanism of the mass death of neural crest cells in TCS points to a probable metabolic oxidative stress response to the mutations in TCOF1. Insufficiency of TCOF1 has been shown to induce oxidative stress, in which oxygen free radicals, reactive oxygen species, and other toxic byproducts of oxidative metabolism build up in cells and damage DNA and other critical components in the cells.

Recent research has uncovered a possible mechanism that could one day be used to combat or prevent this damage to the neural crest cells: the use of antioxidants to counteract the action of toxic oxidative metabolic products and protect cellular components and DNA from damage. In 2016, a group of researchers including Drs. Dixon and Trainor found that supplementing normal pregnant female mice, and treating tcof1 mutant mouse embryos, with the strong antioxidant N-acetyl-cystein (NAC) scavenged toxic oxidative byproducts and prevented oxidative damage to DNA and other cellular contents, preventing cell death and craniofacial malformations that otherwise could have occurred. That same year, another group of researchers led by Dr. de Peralta also found success with antioxidant supplementation in zebrafish (another animal model for TCS), but also found that when the level of Treacle protein is reduced (due to mutations in tcof1), there is a corresponding reduction in levels of another protein called cellular nucleic acid binding protein (CNBP), which prevents increases in the levels of toxic oxidative products. They decided to overexpress (raise the expression level of the gene for CNBP) the protein, which led to reversal of oxidative damage to the stem cells for craniofacial tissues. In this way, CNBP overexpression acted similarly to the antioxidant in protecting these cells from fatal metabolic stress and preventing TCS-like craniofacial anomalies.

In conclusion, the use of antioxidant supplementation in pregnant mothers could be key to preventing TCS and related craniofacial anomalies.