Shane Merem of Storm Taekwondo located in Commerce Township, Michigan held a kick-a-thon at his studio with students of all ages and talents, raising over $5,000 for Children's Craniofacial Association. Their efforts will help send Brooklyn Wojtyniak's family, and other families to Annual Retreat and Educational Symposium. 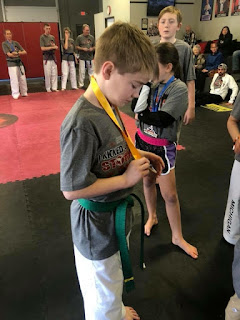 The event was streamed on Facebook. Merem asked the Facebook audience for contributions. Then introduced the kids and adults that would be showcasing their karate kicking skills. Finally, each student had their moment in the limelight as they raised funds with each kick. Prizes were then awarded. Some students even completed a portion of their kicking at home to be sure they made all the karate action happen for their donors.

Merem is a passionate individual. He is very motivated to give the students not only the physical tools for success, but the mental motivation as well. He is force with which to be reckoned. Merem heard about CCA from one of his students, Brooklyn Wojtyniak. The goal was to send her and her family to retreat, but Storm Taekwondo did so much more than that in raising so much awareness and generating so much kindness and helping Brooklyn attain the Retreat Room Reward for netting $5,000.

Generous prize donors offered up incentives for individual and team donors that gave the most money. One team earned the ability to to attend a Red Wings hockey game thanks to Ben Marcum's boss at INTRA Corporation in Westland, Michigan. Looks like these big earners had a great time at the game.

Marcum praises Shane's efforts by saying, "Shane is an amazing Martial Arts Instructor and his school is growing and doing an amazing job developing young kids into champions of life." Marcum also states that Shane recognized how important the Annual Family Retreat and Educational Symposium is to the our families.


Watch the video of the Kick-A-Thon Live Facebook event by following this link. This is a great model for future fundraisers. If you have a studio, Storm Taekwando is willing to walk you through how to run such a fundraiser.


A sports or activity-related fundraiser like this allows many people to get involved, give reasonable amounts of money that make sense for them, and can be completed in a number of different venues. It could be any repetitive activity. You could do a dance-a-thon, basketball shot-a-thon, or even a yoga pose--a thon! Each person sponsors a specific number of shots, or length of time that the participant spends completing the activity. People can donate one unit, or more, depending on the metrics you develop.

Excellent job and many, many thanks to Shane Merem, Storm Taekwando, all the kick-a-thon participants, and Ben Marcum for their thoughtfulness and generosity.