How many of us can say we are award-winning writers? Well, CCA Kid, Ely Potter can now call himself one after writing an essay about The Future of Peace for the International essay contest organized by the Lions Club. Potter won $5,000 and a trip to New York City where he will be honored at the United Nations. Wow! How incredible! 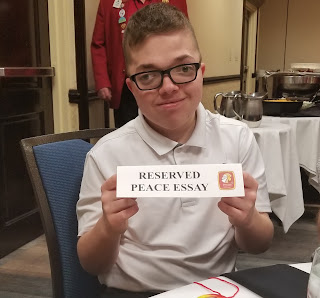 His mother Jamie wrote to CCA to tell us that Ely said he wanted to send his gratitude to the organization. Ely says, "I want to thank CCA, all those people always made me feel like a normal person." Ely says, "He especially wants the kids like him to know they can really achieve anything they set their minds to. And just because other people call you different, different is sometimes a very good thing to be!" 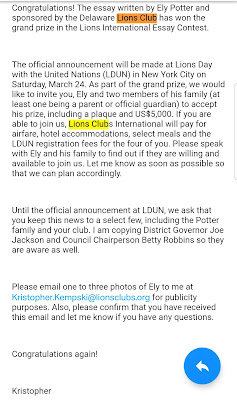 First the Potters found out that Ely had won the district level contest, which pushed his essay further along to the state level in Delaware. Guess what, he won that too! Days later the family was informed via email that he won the Lions International Essay Contest. Here is the email from Lions Club International awarding him the prize.

Here is the text of Ely Potter's essay on peace and his impassioned plea for nonviolence.

Ely, we hope to see more work written by you. From one writer to another, keep up the good work!

There are many fabulous things that the human eye can see and our hearts can feel. Many of those things can be the darkness of pain and depression. Most of those feelings come from chaos and destruction. But know this now, the eternal feeling we know as peace can be stronger than those negative feelings. When there is peace no darkness or evil will corrupt our world. Earth might seem chaotic and deadly with all the murders and natural disasters going on across our planet. People are fearful; people are drained out; but how do we overcome these obstacles? I’ll tell you... with peace that many of us have stored somewhere in our DNA. Many brave men and women have reached out to the troubled ones and pulled them out of the deadly waters and into the peaceful light. Many people helped those who were in great danger by giving them fresh food, games, friendship and helped them back onto their feet again. Does this tell you peace can be in anyone?

It is time to let peace guide us not only in catastrophic times but on a day to day basis. Many people think peace is like what we see in superhero movies. A superhero isn’t just a man with laser vision but are ones that bring peace and sweep away the danger that surround our world.

Martin Luther King Jr is one of the most flawless examples of a peaceful figure. He says ”I have a dream…” more times than anyone. Well, I have a dream to persuade the readers who are listening to my words that peace can never be passed by. Peace is the strongest weapon. It may not fire bullets but it can change the most powerful substance in a villain or a normal average Joe; their hearts. Peace can also spread out of the blue, thus it can be created. In fact, you are creating peace right now. Do you see? Peace isn’t something you can physically create. It is created within your heart, brain and actions. Peace can be quietness, calm, and breathtaking.

Everyone who is reading this drop your blood boiling fists. If we all can have clean hands in this world, everything that came out of pandora’s box would be sucked back up except for hope which all of us hold inside our hearts. With weapons gone and hearts brighter than heaven itself, we will all enter a new world; a world with not only peace but non violence. I might not be in that new world but I can see it through my crooked eyes and my foggy glasses, and most of all I can feel it in my heavenly heart because as I said,”Peace isn’t an object that you can touch it's something you can feel.” This is how I see peace in the future as a nonviolent world. Even though I can’t see well through my two eyes I can see it clearly in my heart.