Artist Josh Gale Wows With His Talent and Personal Story 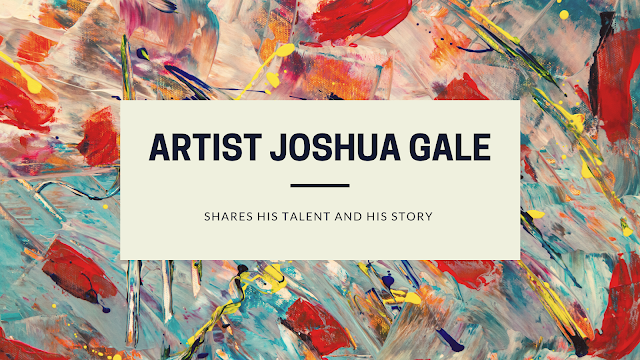 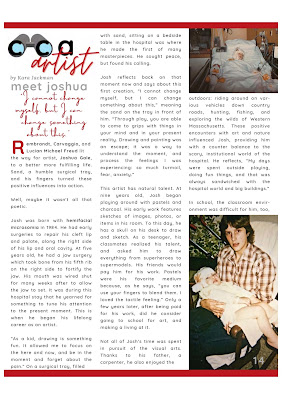 Rembrandt, Carvaggio, and Lucian Michael Freud lit the way for artist, Joshua Gale, to a better, more fulfilling life. Sand, a humble surgical tray, and his fingers turned these positive influences into action.

Well, maybe it wasn’t all that poetiJoshua was born with hemifacial microsomia in 1984. He had early surgeries to repair his cleft lip and palate, along the right side of his lip and oral cavity. At five years old, he had a jaw surgery which took bone from his fifth rib on the right side to fortify the jaw. His mouth was wired shut for many weeks after to allow the jaw to set. It was during this hospital stay that he yearned for something to tune his attention to the present moment. This is when he began his lifelong career as an artist.

“As a kid, drawing is something fun. It allowed me to focus on the here and now, and be in the moment and forget about the pain.” On a surgical tray, filled with sand, sitting on a bedside table in the hospital was where he made the first of many masterpieces. He sought peace, but found his calling.

Josh reflects back on that moment now and says about this first creation, “I cannot change myself, but I can change something about this,” meaning the sand on the tray in front of him. “Through play, you are able to come to grips with things in your mind and in your present reality. Drawing and painting was an escape; it was a way to understand the moment, and process the feelings I was experiencing: so much turmoil, fear, anxiety.”

This artist has natural talent. At nine years old, Josh began playing around with pastels and charcoal. His early work features sketches of images, photos, or items in his room. To this day, he has a skull on his desk to draw and sketch. As a teenager, his classmates realized his talent, and asked him to draw everything from superheroes to supermodels. His friends would pay him for his work. Pastels were his favorite medium because, as he says, “you can use your fingers to blend them. I loved the tactile feeling.” Only a few years later, after being paid for his work, did he consider going to school for art, and making a living at it.

Not all of Josh’s time was spent in pursuit of the visual arts. Thanks to his father, a carpenter, he also enjoyed the outdoors: riding around on various vehicles down country roads, hunting, fishing, and exploring the wilds of Western Massachusetts. These positive encounters with art and nature influenced Josh, providing him with a counter balance to the scary, institutional world of the hospital. He reflects, “My days were spent outside playing, doing fun things, and that was always sandwiched with the hospital world and big buildings.”

In school, the classroom environment was difficult for him, too, as he fought hard to overcome dyslexia, a learning difference, that jumbles words and makes it tough to read and write. In grade school, “After recess, we had these blank books where you were supposed to write. I would just draw. There is so much about ourselves that we cannot change. Yet, we do have control over what we put on that blank page. That was a huge lesson in creating for me.” 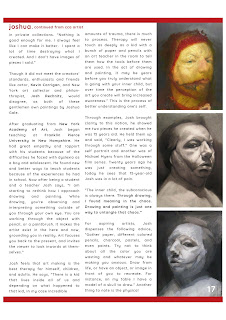 The teachers did not appreciate Josh’s perspective, so he went to a small, vocational school called Franklin County Technical School, where he was able to split his time between vocational education and receiving assistance with reading and writing. Teachers there were very aware of his intellect. One special teacher, Ms. Judy Cummings, got through to Josh, putting a university education on the table. “I had an amazing teacher at Franklin County Tech, Ms. Cummings. I was in the special resource room, where Ms. Cummings was the teacher. I had a tough time laying out ideas on paper, but when I was able to dictate something it came out excellent, so much so that I was accused of plagiarism. This teacher championed me. ‘This kid is brilliant, talented,’ she said. Ms.Cummings and my Aunt Anita, were the ones that encouraged me to go to college. They really helped me out.”

Josh reminiscences about his peer interactions at Franklin County Tech, by sharing this, “In my early teens, 13 and 14 years old, I still got picked on sporadically. However, I developed enough sensibility to be funny, a comedian, and to be positive on the outside, even if I didn’t feel positive on the inside.”

After middle and high school years of what Josh describes as “great pockets of happiness where I felt like I was doing the right things, moving in the right direction,” he graduated high school at 19 years old. He then applied and was accepted to a Western Massachusetts community college where he took art, psychology, and wellness classes. At community college, he painted with oils for the first time. This medium really pushed him out of his comfort zone. “I wish I could be happy painting cows and landscapes, but I always seemed to want to go to the darkest parts of myself. I guess so all of the pain and suffering I experienced will have not been for nothing.”

The hope was that his two years at community college would help prepare him for a four-year degree program at Mass College of Art and Design, but unfortunately, it did not go as planned. Classically trained, and naturally talented, Josh’s style did not jive well with his fellow students at MassArt. His short time at MassArt was very dark, and riddled with drug addiction, but triumphantly, he kicked the habit just blocks from the school that proved a poor fit for him.

He says this formalized education was not a good match for him. “When I went to school to learn how to do this [art], you learn about the concepts of light, volume, scale, and how it all works. Going to school demystifies the magic of art, and it can be sad. After my time in Boston, art lost its wonder.”

Newly released from the chains of addiction and after a brief stint living south of Boston, Josh looked to New York City for his next academic adventure. His dear friend, Tyler Vouros, brought him to visit the New York Academy of Art where he found a home, friends, and a following. Without Tyler’s artistic intervention, Josh says, “I don’t think I would have done half the things I’ve done.” 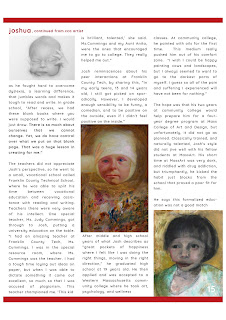 “The people at the Academy were honest about what they did and created. I treated everyone the same, from the janitor to my classmates and teachers. I definitely had more in common with the janitor, though. Many called me the mayor of the school.” With his capacity to bring people together, he launched many art shows. Josh remembers, “I put together my own art show, down the road from the Barclays Center in Brooklyn. I received no help from the school, did it all on my own. I would just talk to people in a bar and make plans to do stuff.” Creating art shows and bringing people together in the New York’s art world is no easy feat. Josh says, “Nobody wants to actually work together. No one cares about you and your artwork. The only people that care are other artists. I was influential in getting people to care and bringing them together.”

Josh had a prolific period when in Manhattan. He painted stunning portraits of himself, friends, and girlfriends. All of his works sold and many are held in private collections. “Nothing is good enough for me. I always feel like I can make it better.  I spent a lot of time destroying what I created. And I don’t have images of pieces I sold.”

Though it did not meet the creators’ standards, enthusiasts and friends like actor, Kevin Corrigan, and New York art collector and philanthropist, Josh Rechnitz, would disagree, as both of these gentlemen own paintings by Joshua Gale.

After graduating from New York Academy of Art, Josh began teaching at Franklin Pierce University in New Hampshire. He had great empathy and rapport with his students because of the difficulties he faced with dyslexia as a boy and adolescent. He found new and better ways to teach students because of the experiences he had in school. Now after being a student and a teacher Josh says, “I am starting to rethink how I approach drawing and painting. While drawing, you're observing and interpreting something outside of you through your own eye. You are working through the object with pencil, or a paintbrush. It makes the artist exist in the here and now, grounding you in reality. Art focuses you back to the present, and invites the viewer to look inwards at themselves.”

Josh feels that artmaking is the best therapy for himself, children, and adults. He says, “There is a kid that lives inside all of us and depending on what happened to that kid, in my case incredible amounts of trauma, there is much to process. Therapy will never touch as deeply as a kid with a bunch of paper and pencils with an art teacher in the room to tell them how the tools before them are used. In the act of drawing and painting, it may be years before you truly understand what is going with your inner child, but over time the perception of the art you create will bring increased awareness.”

This is the process of better understanding one’s self.

Through examples, Josh brought clarity to this notion, he showed me two pieces he created when he was 15 years old. He held them up and said, “Clearly, I was working through some stuff.” One was a self portrait and another was of Michael Myers from the Halloween film series. Twenty years ago he was just creating something, today he sees that 15-year-old Josh was in a lot of pain. 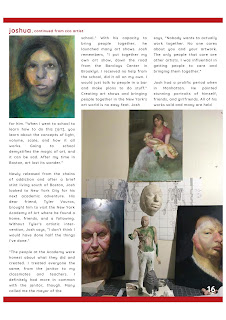 “The inner child, the subconscious is always there. Through drawing, I found meaning in the chaos. Drawing and painting is just one way to untangle that chaos.”

For aspiring artists, Josh dispenses the following advice, “Gather paper, different colored pencils, charcoal, pastels, and even paints. Try not to think about all the color you are wasting and whatever may be making you anxious. Draw from life, or have an object, or image in front of you to recreate. For instance, on my table I have a model of a skull to draw.” Another thing to note is the physical experience of drawing and painting. Recently, Josh painted the walls of his home and remarked that just the “act of painting is a very soothing with many components to that one motion.” Break down the components of your pencil marks, and brushstrokes, and you may just find inner peace like the talented Mr. Gale.

See examples of Josh Gale’s artwork on Instagram at @joshuajgale.