Evansville man encourages students to "choose kind," build friendships with those who are different 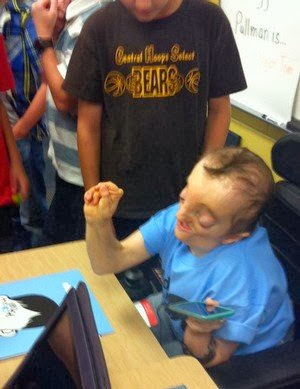 EVANSVILLE — Scott Guzzo’s list of physical deformities is lengthy, but he told Highland Elementary School pupilsThursday being different is easier with a can-do spirit and with family and friends who cherish him for who he is.

“It’s hard to blend in when you were born to stand out,” the 30-year-old said. His words came from an iTouch device. It’s the only way that Guzzo, who has a rare condition called Crane-Heise Syndrome, can speak clearly.

“Don’t be afraid to be friends with someone who looks different,” Guzzo said later.

It’s a lesson that Highland fourth-graders in Tina Thatch’s and Merna Peden’s classrooms are taking to heart. They recently read “Wonder,” a 2012 children’s novel about a child with a facial deformity, how the child deals with it and how other children react.

The book by R.J. Palacio reached No. 1 on The New York Times Best Seller list. Its message is summed up in the phrase “choose kind,” and Highland pupils were clearly moved by the story.

“I’ve never seen kids react to a book the way they did to ‘Wonder,’” Thatch said. “It’s life-changing.”

Guzzo’s visit on Thursday followed up on the book. He seemed as excited to see Highland pupils as they were to see him. Guzzo attended Highland and Thompkins Middle School before graduating from Central High School in 2004. He proudly wears his class ring on his left hand. “Go, Bears,” he told the Highland pupils, eliciting a laugh.

Paula Guzzo, Scott’s mother, said Scott is the only person in the world with Crane-Heise Syndrome; at one time, there were as many as 11. In addition to facial deformities and inability to speak, Guzzo does not see or hear well. He is fed through a feeding tube, and he requires continuous care. He has a curved spine and pressure on his brain. His heart and kidney functions, though, are in good shape.

While Guzzo was a student in Evansville many years ago, peers and even some of their parents had questions and concerns, Paula Guzzo said. But those dissipated, and friendships were formed. During Highland’s talent show one year, Guzzo and a friend did a karate demonstration. Highland pupils on Thursday were shown images of Guzzo with friends at Central’s prom and other events.

Guzzo today takes pride in his volunteer work at Central Library, where he sorts compact discs that have been returned by library patrons, and at the Ford Center, where he scans tickets. He’ll be doing that Saturday night before the Rascal Flatts concert, one of his favorite groups.

Guzzo enjoys movies and music, and he has a close relationship with 25-year-old Aaron Guzzo, a screenwriter living in Los Angeles, who he affectionately called “my little brother.”

Despite the distance, they speak regularly by phone and do video chats.

“He’s a party looking for a place to happen,” Paula Guzzo said of Scott.
Highland pupils listened intently as Paula Guzzo and her husband Bob talked about their son and the message behind “Wonder.” The 57 fourth-graders gathered around Guzzo when the presentation was over to say hello and share fist bumps, Guzzo’s favorite greeting.

Fourth-grader Claudia Emig said “Wonder” was “a really touching book, and it made you realize being different isn’t always easy, and you should always treat people like everyone else.”

Claudia and classmate Gavin Kelley also talked about how much they enjoyed Thursday’s classroom visit.

“It was awesome,” Gavin said. “I was telling my friend it was a really cool. We were like, ‘We don’t want to go home today.’”


More information:
Paula Guzzo is on the National Board of Directors for the National Craniofacial Association, and she just began a series of blogs about her son. The website is www.ccakidsblog.org
The Children’s Craniofacial Association Wonder Page is www.ccakids.com/wonder.html
This link is to CCA’s anti-bullying video, in which Guzzo appears: vimeo.com/49959214
Wonder-related Links, Blogs, Resources for teachers: www.ccakids.com/wonder-links.html

This story originally appeared in the Evansville Courier & Press on October 10, 2013.