Seattle Children's Hospital publishes blog called On The Pulse, with interesting patient stories on what it is like to undergo treatment and surgeries, which can be a scary process when you don't know what to expect. We enjoy featuring stories of children and families who have found and received successful treatment and want to share their journeys with other families at different stages of the process. Below, you'll learn about Genesis and Grayson, and two journeys through surgery, in"A Family Approach, The Unique Stories of Two Craniofacial Patients."

If you are a family with questions, please contact us at the office (800.535.3643) and check our Programs and Services page on our website. We also have a list of Qualified Centers.

Discovering your child has a craniofacial condition can be a stressful time filled with questions and uncertainties. Seattle Children’sCraniofacial Center aims to not only keep the patient’s needs in mind, but also the needs of the entire family. Below are the stories of two unique craniofacial journeys and how the patients and their families received support throughout the process.

Genesis Murillo is a fun-loving, 4-year-old who was born with bilateral cleft lip and palate – a birth defect that occurs when parts of the lip and roof of the mouth don’t fuse together during pregnancy. Cleft lip and palate affects one in 700 infants worldwide, and is one of the most common birth defects. It can be caused by several factors, including genetic abnormalities, but there is no single cause.

Genesis’ mother, Nolby Manzanares, discovered her daughter’s unique abnormality during one of her first ultrasounds, and the entire family was immediately overcome with worry and uncertainty. After meeting with the doctors and care team at the Seattle Children’s Hospital Craniofacial Center, Genesis’ family was comforted knowing that her craniofacial condition could be treated.

It is understandable for any parent to feel concerned after discovering an abnormality in their child while pregnant. While Manzanares was fearful at first, she felt a sigh of relief after the Seattle Children’s doctors educated her on Genesis’ condition and informed her that they would be able to repair it. The reassurance and resources Manzanares received from the Seattle Children’s staff helped put all of her initial worries at ease.

“It was hard. Nobody in my family has ever had cleft lip and palate,” said Manzanares. “When I met the doctors, they told me they’d be able to fix it. I felt so much better after meeting with them.”

Genesis was a very strong girl throughout the treatment process, and endured three surgeries before she was 18 months old. The family made frequent visits to Seattle Children’s and met often with Genesis’ doctor, Dr. Kelly Evans, and her surgeon, Dr. Raymond Tse.

“I met Genesis’ parents during a prenatal clinic visit at the Craniofacial Center, where they also met a craniofacial social worker and craniofacial nurse,” recalled Evans. “As a team, we were able to talk with her parents about having a baby with cleft lip and palate. At our first clinic visit with Genesis, we were able to cater our discussion to Genesis’ specific needs to develop a holistic treatment plan. It was clear from the very beginning that Genesis had joined a loving and supportive family.”

“We met with Dr. Kelly on the first day and it was so comforting,” Manzanares recalled. “She really connected with Genesis and treated her and our entire family with care. It made me feel a lot better.”

Genesis enjoyed every minute with her doctors. She even helped the doctors by handing them medical tools they needed for her procedure – all while reminding them to give her stickers at the end.

“Genesis did great during her surgeries,” said Tse. “With careful treatment, kids do great. They do what they want to do and be who they want to be. The fact that a child has a cleft lip doesn’t have to hold them back.” 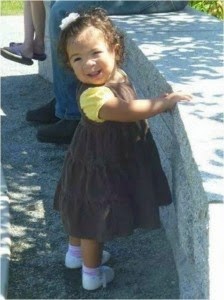 Genesis is awaiting her fourth surgery at Seattle Children’s to fix her breathing issues. Through her high spirits and trust in her doctors, she will continue to use her positive energy to make it through this upcoming procedure.

Turning to the right resources, like visiting online medical associations’ websites and consulting doctors directly for their medical opinion, led to a proper and thorough diagnosis for Genesis. It also gave Genesis’ family confidence that her condition was not as abnormal as they initially thought, and that it could successfully be repaired.

Genesis and her family continue to visit the hospital each year for the annual craniofacial picnic, and plan to remain deeply-rooted in this unique community that played a special role in their lives.

In the past year, Grayson McLaughlin of Spokane has seen more of the world than the average 2-year-old. From flying to Seattle to dipping his toes in the Maui sand, Grayson and his family have spent many days traveling together to take a break from their daily lives.

Grayson took his first trip very early in his life. At just eight weeks old, Grayson was diagnosed with metopic craniosynostosis – a rare craniofacial condition that occurs when one or more of the special joints (or sutures) in a baby’s skull fuse together earlier than normal, causing a malformed head shape that prevents the skull and brain from fully developing. Each year Seattle Children’s evaluates around 80 new children with craniosynostosis and performs about 90 surgeries to correct this condition.

Grayson and his family regularly traveled 300 miles to Seattle Children’s Hospital – a journey that his mom, Katherine McLaughlin, made sure to document in Grayson’s blog.

“We’re so fortunate to live just a short flight away from Seattle Children’s Hospital to receive top notch care at their amazing craniofacial clinic,” said McLaughlin.

During his treatment at Seattle Children’s, Grayson and his family often met with their integrated craniofacial care team – a team that supports the patient through the entire care process from beginning to end, ensuring that the child and family are comfortable and receive comprehensive care. Depending on the circumstances, a care team can be comprised of and anesthesiologist, neurologist, social workers, nurses, craniofacial plastic surgeon and a neurosurgeon.

“The team at Seattle Children’s was awesome,” said McLaughlin. “They laughed about how much energy Grayson has. When he started to melt down after eight hours with no nap, they turned the lights down and let us put him to sleep before continuing with the appointments in whispers.”

The entire surgical procedure was disclosed to Grayson’s parents, who appreciated knowing what their son would endure. According toMcLaughlin, Grayson’s condition required a craniofacial plastic surgeon and a neurosurgeon to remove the front of his skull and reshape it with screws and plates.

“I’m always taken aback by how kind, gentle, and personable both his plastic surgeon and neurosurgeon are, and how patient they are at explaining things to us and answering all our questions,” she said.

When Grayson’s bones were more mature, his surgeon, Dr.Craig Birgfeld, broadened his skull and widened his orbital bones. After six hours in the operating room, Grayson’s scull had been remolded and reshaped to allow his bones and brain to develop properly. “One of the hardest things was the realization that after the surgery, my baby’s appearance will be changed dramatically,” said McLaughlin.

“Grayson demonstrated improvement immediately after surgery, and required only a few days of recovery,” said Birgfeld. “I was very pleased with his outcome. I expect his skull to continue to grow and develop normally without his peers ever knowing he even had surgery.”

Nearing the end of Grayson’s medical journey
Grayson and family returned to Seattle Children’s earlier this year for his one-year post-op check-up. Swelling around his face had diminished and the scars on his head were nearly invisible, but his doctors said there is still more healing to be done.

Grayson will be back in one year for a CT scan, and as his cranio journey comes to an end, he and his family look forward to more vacations, like their recent trip to Maui.

“Having a child with craniosynostosis can be an extremely scary time for a family,” said Birgfeld. “This is why our team exists. We aim to guide families like Grayson’s through this stressful time and provide them with what we believe is the best, safest treatment with the least intrusion upon the child and the family’s lives. We will always be here for our patient families.”

Seattle Children's Hospital recently published a video series on Craniosynostosis and has shared this resource with us. Below you will find six videos, which are excellent for spreading awareness and information, plus the series gives parents and family members reassurance and advice when anticipating surgery for craniosynostosis.


In the series, you will find the following videos:

Here's Julian's story, which is Part 3 in the series.

CCA thanks Seattle Children's Craniofacial Team for sharing these videos with us.