Our Journey to ASL 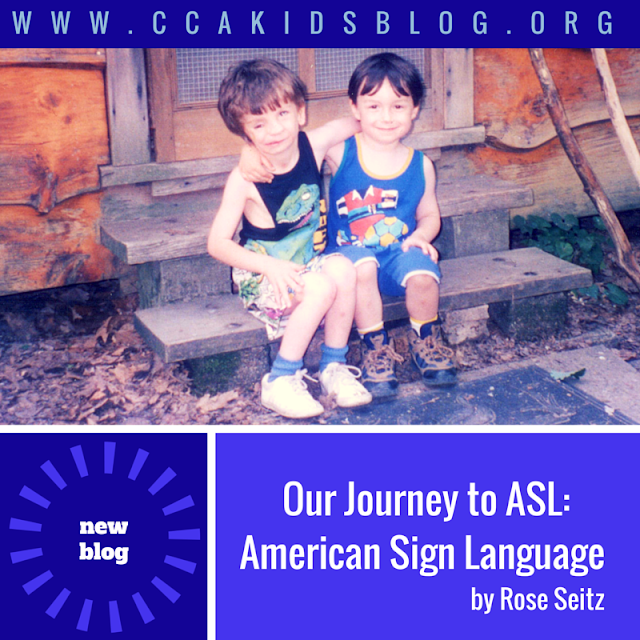 Our Journey to ASL - American Sign Language
by Rose Seitz


My son, Freddie, was born in 1992, three months premature, diagnosed with Goldenhar’s and a multitude of health issues.  The first year was a challenge but was also filled with much joy, watching him grow, smile, laugh and enjoy life.  He had a trach and was not able to vocalize very well so we started teaching him sign language at 6 months.  He caught on quickly and was soon signing in sentences.  At that time our sign language education consisted of my frequent trips to the library gathering all of the books I could find on the subject.  No Internet for me, it was 1992.

At that time he was hearing but at the age of one we noticed that his hearing started to diminish.  All of the hearing was gone by the time he was three. Over those three years we had been bringing him to speech therapy at our local hearing and speech center.  The therapist was teaching us signs as he was learning them.  I labeled EVERYTHING in our house with sticky notes. Shoes had sticky notes: “SHOES,” and we would show him the sticky note, the shoes and sign shoes. You name it, it had a sticky note.  When he was three we enrolled him in pre-school.  At that time we all knew sign language for 3-year-olds but now it was time to learn some syntax so our entire family -- grandmas, grandpas, aunts, uncles, cousins, friends and even his pre-school teacher and her husband -- enrolled in a sign language course at the local hearing and speech center.

This was a new chapter for us, as we started signing in more “English” structured sentences.  You should know there are a couple of different schools of thought out there regarding teaching a deaf child sign language.  Some believe that a deaf child should be taught ASL, which is a separate language from English.  It has its own syntax. It is not English syntax.  Some believe that a deaf child will learn better if they learn ASL first while others believe in teaching the child SEE, Signing Exact English.  Every spoken word is signed in the same order.  It was back to the library for me.  I read every book, pro and con, I could get my hands on so I could decide what would be best for my son.  Ultimately, we decided we would sign SEE until he reached a point in his teen years where he could transition into ASL.  I believe we made the right decision for him. 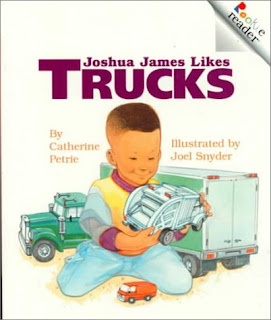 He started reading at age 4. The first book was Joshua James likes Trucks.  We read the heck out of that book.

We used SEE primarily until the 5th grade.  From Kindergarten thru 4th grade, Freddie attended a mainstream school that had a hearing impaired unit.  We had decided to send him there instead of our home school district as they had teachers who could teach a deaf child to read and write.  The problem with that was they treated deaf students just like they were “impaired.”  Thru MANY struggles in that school district we finally transitioned him into our home school district in 5th grade.  I’d like to take credit for the move but it was really Freddie who wanted it.  He wanted to attend the same school district his brother went to and he wanted to be treated like everyone else, who could blame him?

That year an angel, in the form of Miss Irene, entered our lives.  Miss Irene is a deaf woman with a Masters of Education in Deaf Education.  She had just retired from a local school district but not for long.  She became Freddie’s tutor and mentor and continues to be a mentor to him today... to all of us really.  She taught him about Deaf culture and ASL.  This began our transition into ASL.  He started using it more and more until I started to notice that he used it primarily in High School with his interpreter and Miss Irene.  The funny thing is he would still sign SEE to me and even when I would ask him to sign in ASL to me, he would refuse.

As Fred went off to College in Rochester, NY -- 5 hours away -- I noticed that his ASL signing was getting out of hand! I couldn’t understand him when he was talking to his friends at RIT!  I wouldn’t have that so I enrolled at the local hearing and speech center again, this time to learn ASL.  He has far surpassed my signing skills and truth be told, my finger reading is BAD.  I can fingerspell but when it comes to reading it, I have decided that part of my brain simply doesn’t work!

Freddie has arrived to ASL but my journey continues.  I continue to learn ASL whenever I speak to a deaf person.  There are always signs I do not know and have to ask what they mean, but I think that is the nature of language.  There have been a few times that I knew a sign that Freddie didn’t know... boy, did that make him mad!  So I will continue my journey and every once in a while I get a little nugget, that sign he doesn’t know, just so I can remind him that I can still teach him a few things.

---
Many CCA Kids use sign language and methods other than speech to communicate. If you're interested in learning sign language, most libraries across the country offer free video and online programs. Plus, the internet has dozens of great resources, including videos, self-study schedules, and quizzes for you.

Got 20 minutes? Why not start learning your first 100 signs: