From the Bench with Francis 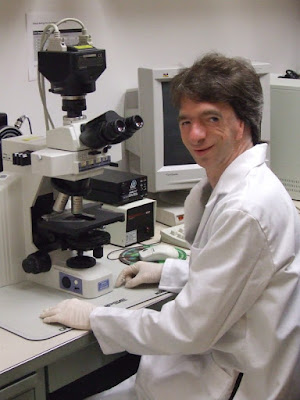 Today we have an entry from one of our longtime CCA members, Dr. Francis Smith. He recently returned from a research trip and shares this update with us. We are looking forward to the culmination of these interviews he is conducting. Thanks, Francis!

From the Bench with Francis
by Dr. Francis Smith

In the middle of March this year, I attended an international craniofacial research conference in Ventura, CA, called the Gordon Research Conference on Craniofacial Morphogenesis and Tissue Regeneration. Part of a larger series of Gordon Research Conferences, this one is held biannually, alternating between Ventura, CA, and Il Ciocco, Italy (hence, the next one, in 2018, will be in Italy). As a researcher, since I was in graduate (PhD) school years ago, I have gone to many scientific conferences in the US and abroad to present my research. Often I get to share not only my research, but also my unique connection to my research.

In advance of the conference, I made a poster about my ongoing public engagement initiatives and strategies for public outreach and fostering collaboration between researchers and craniofacial doctors.

Our conference was held at a resort hotel (designed by the late Frank Lloyd Wright’s architectural firm) with plenty of conference space and we took all our meals together in the spacious restaurant overlooking the Ventura Harbor.

On the day and a half before the actual conference, there was a Gordon Research Seminar for postdoctoral fellows (like me) and graduate students in which we presented our research to our peers, both oral and poster. I presented my poster on public engagement strategies and reconnected with old colleagues (and met new ones) from round the world.

On the day the conference itself began, I was happy to see many of my old mentors from London, San Francisco, and Calgary come in, as well as others I had met in the past through connections I made at previous conferences and other events. Throughout the rest of the week, I met many new colleagues (it is vitally important in my field to make as many connections as possible—it’s called networking) from across the nation as well as round the world.

Our days were filled with talks from eminent researchers about the latest advances in research concerning the genetics and molecular biology of embryonic development of the craniofacial complex, as well as craniofacial malformations (including some talks on Treacher Collins syndrome; they’re always finding some new culprit gene for it or something new about the etiology of it).

Midday and afternoon were lunch and free time. I went to downtown Ventura a couple of times just to browse the bookstores and antique malls. I picked up an excellent condition 1946 textbook on oral surgery and walked around the entire harbor and marina, and once waded into the ocean. Later each afternoon there was a poster session (with posters all set up and people discussing them), then dinner, and a full slate of more talks into the evening, followed by social time with a bar on hand.

All in all, this conference was a great way to reconnect with old colleagues, meet new ones, and spread the word about craniofacial public engagement.