I’m hopeful that it will be a long time before I have to consider online dating, or any dating at all. But if I did…?

I have been married to the same guy for nearly 20 years and would like to make it 20 more. My husband Ian happens to be the only guy I’ve ever been on an actual date (though not the only guy I’ve been with). Never having to date again would be even better.

So Why Am I Writing About Online Dating?
A conversation came up on an About Face Facial Difference conference call about dating and relationships, and when it came to online dating, the question was asked:
“For those who have tried or considered online dating, have you or would you post a photo along with your listing?”

I don’t think on line dating would work very well for me. I would not want to have an online profile without a photo, but a photo would either be a huge turn-off, or I’d get a lot of unwanted attention.

This does not mean that I am ashamed of my appearance. Quite the contrary. However, I am in touch with reality.

Many years ago, when I was single and print papers were still the thing, I ran a personal ad. Photos were not an option. I sure looked good on paper. Height/weight proportional, writer, black belt in Karate, active, loves horses, design lights for community theater and have a steady well-paying job in video production with the Federal government. What I didn’t say is that half my face is paralyzed and that I was living with a drug addict whom I was enabling, and who didn’t make me feel very good about myself.

I got several calls. Rather than waste people’s time, I was up front over the phone about my appearance. One guy, a firefighter, didn’t even want to meet me. Another guy agreed to meet, but I made the mistake of having him over to my house, where he met my drug addict housemate. In truth, this guy wasn’t my type anyway, so when he said he wasn’t interested in another meeting, I was neither surprised nor disappointed. However, it helped me to realize that the Personals were not the most likely way to meet someone I’d be able to have a long term relationship with.

Usually, once someone gets to know me, they quit noticing my facial difference. Therefore, if someone is going to be attracted to me, it’s going to be primarily because of my personality and interests. While I might be able to eloquently convey my interests in an online profile, a potential love interest won’t have a sense of my personality until they spend time around me. It is my personal belief that if I did not have Ian in my life, any romantic relationship would need to happen organically, based on some quality time spent with one another.

Now, that's not to say it couldn't happen online. I could strike up a conversation with someone I met on social media, but it would be more what I have to say and how I convey it over time that would forge a friendship, attraction, and eventually lead to a healthy romantic relationship. They would have to come to the conclusion on their own that my face doesn’t matter just like Ian did.

My best advice to people looking for a relationship, no matter what physical challenges or appearance issues you may have, is to get out and do things you enjoy. Ian and I met designing lights for Community Theater.

Get out and do things that make you happy. Enjoy life. Interact, even if you have to start with social media rather than in person. Do what you love and be your happy self - That’s what makes you attractive. 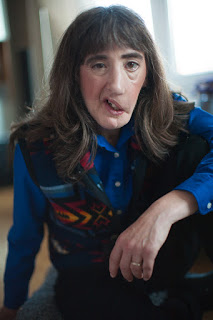