From The Bench With Francis: A Craniofacial Sabbatical in Brazil


A Craniofacial Sabbatical in Brazil:
University of Sao Paulo Faculty of Dentistry (Sao Paulo) and the Hospital for Rehabilitation of Craniofacial Anomalies/Centrinho (Bauru)
In November 2017, I spent three weeks working in Brazil on sabbatical in both Sao Paulo and Bauru. The main goal was to visit the unique Hospital for Rehabilitation of Craniofacial Anomalies (Hospital de Reabilitacao de Anomalias Craniofaciais, or HRAC), whose campus is also called Centrinho, in the small Brazilian city of Bauru; this is the only hospital on Earth I know of that is solely devoted to craniofacial research and treatment of craniofacial anomalies. I first heard about this hospital when I was visiting a colleague at the University of Dundee Dental School in Scotland in January 2016; he encouraged me to visit this institution and put me in touch with one of the major faculty members there. All three of us began to communicate once I expressed my desire to visit there, and we got the ball rolling on a future visit. At a craniofacial meeting that March in California, I met some new Brazilian colleagues, including a faculty member at the University of Sao Paulo dental school in Sao Paulo. In 2017 when I got enough personal funding, I began making real plans for a visit to Centrinho. My contacts at Centrinho asked if I could spend up to three weeks working with them there, preferably in November, including giving some talks and lectures and visiting clinics and operating theatres. Closer to the time, I informed my new colleague at the Sao Paulo dental school of my plans to come to Brazil and asked if I could visit her as well. She of course agreed. Eventually the plans evolved into spending the first week at the Sao Paulo dental school visiting and giving a seminar, and visiting Centrinho in Bauru the next two weeks. 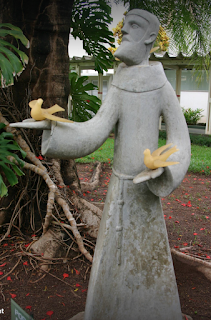 My first week in Brazil was spent at the University of Sao Paulo (USP) dental school, working with my new colleague there (who is a professor with her own lab) and meeting her colleagues and students. I visited several clinics and departments. I gave a seminar to the faculty and students on my life experience with Treacher Collins syndrome and my research. My new colleague approached me with the possibility of working with her there in the near future. During that week, she also showed me around the huge metropolis of Sao Paulo (population of 12 million, much bigger than New York City’s 8.5 million).
After that first week in Sao Paulo, I went to the small city of Bauru five hours west of Sao Paulo by road. Bauru is physically smaller than my hometown of Fort Wayne, IN, but has significantly more population (almost 370,000 vs. nearly 265,000 in Fort Wayne), thus is also more densely populated than Fort Wayne, with most living in high rise blocks of flats. There, I was introduced to my two new colleagues (to whom I was introduced by my Scottish colleague earlier) who work at the Hospital for Rehabilitation of Craniofacial Anomalies on the Centrinho campus in the middle of Bauru. This unique hospital is solely dedicated to craniofacial research and correction of craniofacial anomalies, and draws children from all over South America. On the Centrinho campus there is also a branch of the USP dental school, and there will soon be a branch of the medical school. The first weekend I was there was an international symposium on orofacial clefts; I had been previously invited to give two talks at this two-day meeting. I gave one talk on my life experience with TCS and another focusing on my research experience. For the next two weeks, I worked with my Centrinho colleagues, visited the new patients’ clinic, and met many of the surgical, dental, medical, and research doctors working there. I visited the dental clinics and even observed two cleft surgeries in the operating theatres. I spent several days assisting one of my new colleagues in her research that involved measuring the upper airway volume in 3-D CT scan images of patients with Treacher Collins syndrome; we hope to publish this research together in the future. A local TV crew came to the campus to interview me, my colleague, and a patient with TCS and his mother for a special programme on Treacher Collins syndrome that they scheduled for release on the same day the film Wonder (translated as Extraordinario for the Brazilian market), in early December. On my final day at Centrinho, I taught a class to dental students on the upper airway obstruction characteristic of Treacher Collins syndrome, using my own artwork (sketches of my own TCS skull and the TCS airway, etc.) for illustration of the jaw deformities and other causes of upper airway obstruction and how it is addressed surgically and otherwise.


I truly enjoyed this unique opportunity and gained experience in research, lecturing, teaching, and otherwise, as well as meeting so many wonderful new colleagues in Brazil.