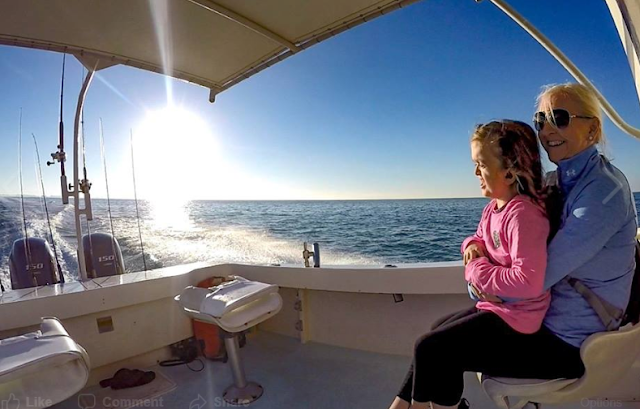 In March, North Florida native, Delaney Cunha, and her Mom and CCA Board Member, Kelly, enjoyed a day on the high seas learning how to fish with Chasten Whitfield. Chasten, (AKA "Chaz") has always loved fishing and philanthropy. She has been able to combine her two passion through her Chastenation, where she introduces children that face medical challenges to the sport of fishing.

Chasten's charitable life began at a young age, raising money at the age of five for St. Jude's Children's Research Hospital. Each year from kindergarten to fifth grade she held a garage sale, in those six years she raised $6,000 for St. Judes.

In a cruel twist of fate, she says, her brother was diagnosed with "a rare tumor in his hand, so it was my first lesson in things coming full circle." As she was managing life with her sick brother, she entered junior high where she was bullied for "being the only girl who fished,"

Chasten says, "All my friends were doing all-star cheer and I wasn't the best cheer leader, so my mom talked me into a fishing tournament." She won first place in that competition and the rest is history.

The money she won went right back to kids in need, this time to for camp for kids that suffered bad burns. Chasten also spoke at schools about bullying. This was particularly remarkable since she started this work in her sophomore year of high school.

Then in 2016, her two worlds of doing good and fishing collided again. Chasten recounts the story that started the work that she is currently doing, "I did a fish camp off a pier [during the] summer of 2016 and met a little boy in a wheelchair who had never been on a boat or fished. I was determined to help him catch a fish and when he did, he did donuts in his wheelchair screaming I caught a fish!!! That feeling of joy, the self esteem that little boy just gained was unbelievable."

Right there Chasten knew she had found her calling. The boy and Chasten became friends. She took him on her boat to go fishing. He was the first in over 47 kids she would introduce to the sport of fishing. Chasten sells T-shirts on her website, Chastenation, to fund these trips out on the water for kids with medical challenges. Yellowfin boats helped build a boat hearty enough to hold a wheelchair and other meidcal devices. There are other small businesses that sponsor her work or volunteer their time, making these fishing expeditions possible.

Chasten wants the experience with the kids to be "a day for them to forget all their troubles. A day where they don't have to fight what they normally fight, they just have to fight for a fish...that's it."

And fight for a fish was exactly what Delaney Cunha, born with Pfeiffer's Syndrome, did on a bright, beautiful day in the middle of March 2018. Delaney and a camera crew went out on the Yellowfin boat to catch some fish.

Delaney came to Chasten's attention after winning a Tampa-area parenting magazine cover contest. Thanks to all Delaney's many friends at CCA, she won, which got the attention of Chasten also a Tampa native. Watch the videos of Delaney's big day and hear more about CCA from Mom, Kelly.

If you live in the Florida area, feel free to contact Chasten through one of her social media accounts.  She is super friendly!