(Editor's Note: This reflection emphasizes the importance of Craniofacial Acceptance Month for all of us. Rachel Seppie, mother of a son born with craniosynotosis, discusses the birth of her son, the love of her daughter for her sibling, and how they took on the world as a family.) 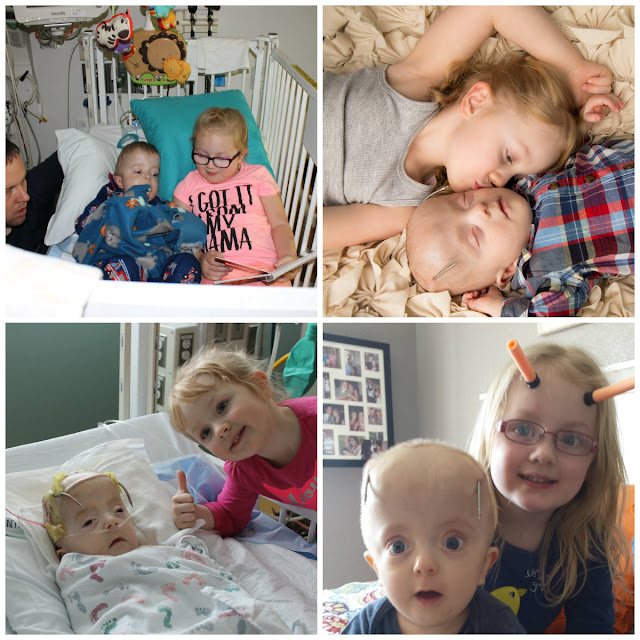 The first weeks home we were wracked with fear of the future it would have consumed us if not for the vibrant little girl who treated him like any big sister would.  She was possibly the only one who saw completely beyond the diagnosis, the looming surgeries and just saw love.  She became our backbone, keeping us all smiling and providing a much needed since of normalcy.  I will never be able to understand how she was so perfectly chosen for him, the ways she taught us to deal with hardships and how quick to adjust to scary situations.  One of my favorite memories was after his first major skull surgery, Posterior Cranial Vault Distraction. I sat in the waiting room with Aspen as she waited to see her brother.  “Sis, I want you to be ready to see brother because he does not look like himself” she nodded that she understood. “Remember yesterday they had to fix his skull so his big brain had room to grow? Well he has a great big cut on the top of his head and some little metal things on his forehead, but he is okay and he wants to see you.”  “Okay Mom, can I go see him now?” She responded plainly.  Inside I was panicking about how she would react.  Without hesitation she bounded into the room and climbed on the stool next to his bed in the Pediatric ICU.  She looked right at his face and grinned “Hello there Bruddy” she called him by his nickname.  “Wow, look at your horns” she added amazed, and that was that.    As I glanced back in awe of my resilient kids Aspen flashed me a reassuring smile and a giant thumbs up. Landon would undergo 18 surgeries in his first 4 years of life including two rounds of Distraction on his skull.  After round 2 Aspen was so impressed with her brother’s awesome new hardware she came home and stuck two nerf darts to her forehead and spent the rest of the day pretending she had Cranio as well.  She has never let him go through anything alone and she has always been there with a smile and a thumbs up. 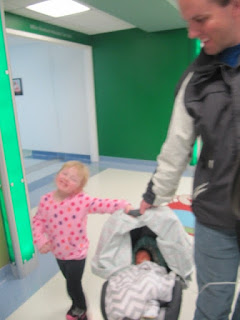 I sit here and think of how many times were we have been on the receiving end of stares and unkind words. Times that I could not swallow the lump in my throat in time to respond before my sweet little girl chimed up for us.  At the Library once a child turned to her and said “Look at that weird baby over there.”   I waited with my breath held several feet away to see her response, not wanting to draw too much attention just yet. “What baby?” she looked around and saw nothing. “That one, right there” he pointed at Landon.  Aspen’s face went from confused to annoyed in no time flat. “That is my brother and he is notweird” she emphasized each word of her response.  “He is perfect.”  She calmly turned around and got along with business as usual.   I swallowed a lump in my throat, my eyes stung but I refused to cry until I was safely in my car. I sat sobbing in the parking lot of the library, wishing that when people looked at him they could see what the two of us sitting in the car did.  They would see someone who had been alive only six months and had battled his way back to his family many times, he suffered more pain than any adult I knew, he was brave and strong and amazing.  His huge intimidating scar couldn’t have been anything different, each of the hundreds of stitches on his scalp represented a moment of bravery and every amount of pain he had overcome being anything smaller would not have done him justice.  “Mommy don’t cry about what other people think, our brother is perfect just how he is” a wise little voice chimed in from the backseat.  My heart wanted to explode with love for this kind, brave wise little girl.

I am always going back to that moment in bed with her wondering what the chances were that she chose that name of all names.  To us rainbows are beautiful, heaven sent and often signify strength after a storm.  It is so fitting it still gives me goosebumps.  I am so proud of the warrior she is, understanding Craniosynostosis and all that comes with it from such a young age and yet not letting it affect her relationship with her brother.  We spend so much time educating our community on his diagnosis but she spends her time teaching the world about her little brother- the boy behind the diagnosis.    Aspen has stuck by all the promises she made her brother while he was in the womb.  She has protected him, loved him, been his friend through everything and just last week I caught her trying to teach him how to clean her room.