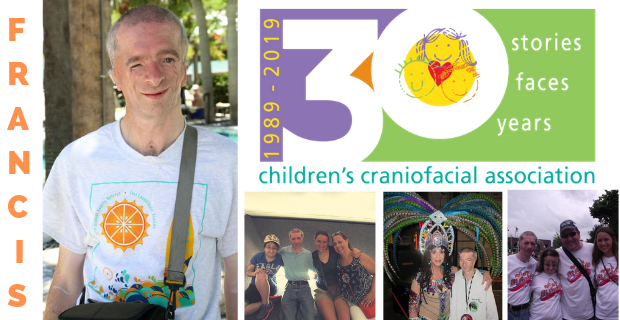 Ever since I attended my first CCA retreat in 1994, in Indianapolis, I have felt immediately like part of the family. Not only that, but I found quickly that I could be an adult mentor to the children and a peer mentor to adults affected by craniofacial differences, due to my own life experience with Treacher Collins syndrome. I also enjoy encouraging their parents and families. Over the years, I have become more up front as an advocate. I treasure the lifelong friendships I have made and opportunities to meet and encourage new families in the craniofacial community. The CCA Cher's Annual Family Retreat is the highlight of my year, and I look forward to many more years. Craniofacial advocacy (including involvement with CCA) has gone hand in hand with my burgeoning career in craniofacial scientific research.


Francis lives in Aurora, Colorado who works as a craniofacial research doctor. Currently, he hopes his next research appointment will be at a European university. Most recently, he completed a post-doctoral fellowship at the University of Denver. He earned a doctorate in Oral and Craniofacial Sciences from the University of California San Francisco for his research on hypoxia induced craniofacial malformations in 2012. He holds a BSc from King’s College and a Master of Science in Biology from Purdue University. He enjoys playing piano and violin, drawing, reading, and collecting antiques, especially old medical devices and instruments. In 2018, Francis published his biography, Wonderfully Made with co-author Michele DuBroy.

He says, “As a man with the rare craniofacial disorder, Treacher Collins syndrome, my life has been a struggle and an adventure. My childhood was rough with bullying in school and exclusion from childhood activities, but my adulthood has been an adventure because my TCS has given me untold opportunities to publicly speak out for awareness of craniofacial differences whilst being a craniofacial research scientist.”