Every Kid Needs a Hero! 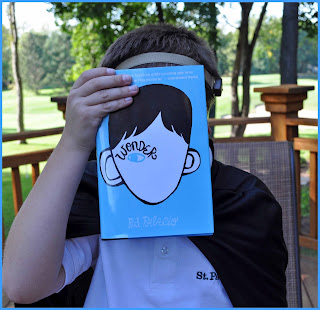 Today is my son Peter’s 12th birthday, and I’m so very proud of the young man he is!  The best birthday present he's received is the national recognition and acceptance that R.J. Palacio’s debut novel, Wonder, is giving to kids like him.  Every kid needs a hero to inspire them, and I want to thank Ms. Palacio for creating one for my son.  If you have read Wonder, I think you will agree that the main character, Auggie, is a hero that everyone can fall in love with.  For a 12-year old boy with a craniofacial syndrome, however, there are simply no words for what it feels like to have kids around the country reading this book and cheering for Auggie.  This book has given my son and the craniofacial community something we have always desired:  for people to look beyond our children’s faces and get to know them for who they really are.

Peter loves this book and wants all his friends to read it so they will, “understand me better.”  For the #WONDERschools Blog Tour, we thought it would be fun to give classrooms around the country a real-life comparison to Auggie.  Look at the picture of Peter and see if you can identify at least five things that remind you of “Auggie”. 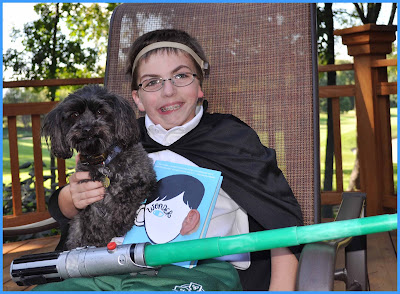 
They have many other similarities that aren’t depicted in the photo.  Here are just a few you might want to discuss.


Peter and Auggie also have differences that you can’t see in the photo: 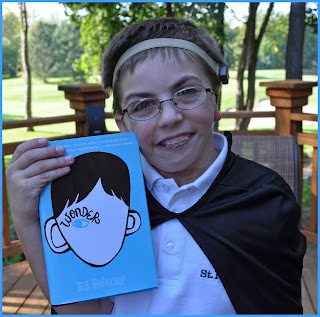 At the beginning of the book Auggie says, “If I found a magic lamp and I could have one wish, I would wish that I had a normal face that no one ever noticed at all.”  Peter wishes for the exact same thing every time he is asked that question.  While I would like that mainstream acceptance for Peter, I also believe he has a unique opportunity to leave others with a positive life-altering impression.  Our kids have the gift of inspiring those around them.  As Auggie says in the book trailer, “It’s hard to blend in, when you were born to stand out.”

Always remember to “Choose Kind”.  If you want to send Peter a birthday wish, please donate to Children’s Craniofacial Association by visiting his fundraising page at www.firstgiving.com/fundraiser/petesoktoberfest2.

Follow these links to read our other blogs about Wonder:  The Power of First Impressions and A Mother's Love has no Limits.  To read more blogs about Peter, read What's in a Name?, Why Me?, Snakes, Crabs & Geese... Oh My!, My Lesson from a Ten-Year Old, The Things we Take for Granted, and The Importance of Unconditional Love

Dede's family lives in metro Detroit where they enjoy cheering on the Detroit Tigers and Detroit Red Wings.  She has two rowdy boys ages 12 and 7, two crazy dogs, and one dedicated husband.  Peter was born premature with Goldenhar Syndrome.  He spent his first 3 1/2 months in NICU and came home from the hospital with a trach, feeding tube, oxygen, and lots of machines!  Jacob is four years younger and is unaffected.  He enjoys playing hockey and winning at anything he deems a competition, which is basically everything.  Peter is an avid reader, a walking encyclopedia of Star Wars, and a fan of playing jokes with his prosthetic ear.  Dede is a family-faculty speaker at children's hospitals and serves on the Board of Directors for Children's Craniofacial Association.  Follow her on Twitter @ddankelson.