By Jenna Ottow
My day started out like it normally does.  I take a 25-40 minute train ride, depending on the day, from my apartment in Malden into downtown Boston where I work.  I get on at the second stop on the line so the train is usually fairly empty. As the train choo-choos along people pile in.  By the time it gets to North Station, a connecting hub, it’s jam packed. I usually enjoy the commute. I have a playlist I listen to, sometimes a podcast, but mostly I let my brain wake from the slumber of sleep to the bustle of the busy day ahead.  It’s a process.

On this particular morning, I was able to find a seat where I sat listening to whatever humdrum was playing in my ear as the other passengers milled around me.  I surveyed, like I’ve seen other riders do, not really looking at anything in particular, but changing the scenery with the tilt of my head. It was then that I could feel the stare.  A hard stare. Most of the time I don’t even notice it, especially when I am on foot. However, sitting still on the train it was hard to avoid and impossible to ignore. I was born with a rare, craniofacial birth defect called Apert syndrome that causes 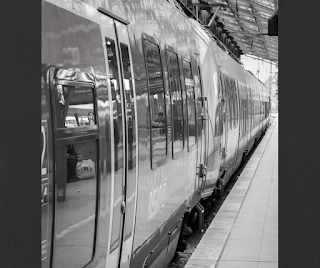 onlookers to look.  They not only look, but they stare, point, sometimes name call, which happened lots when I was younger. Now, as an adult, I just avoid eye contact all together. This was not the case this morning on this train.  I was uncomfortable. I glanced over at my ‘admirer’ like a reflex. It was a younger woman, mid-20’s, headphone chords coming out of her ears and sunglasses resting upon her head, chomping on gum between her pearly whites, which I fantasized punching out. There she was...staring.  I smiled, politely, not really in the mood to exchange much more than a nod, then I looked away. I fumbled with my phone for the next song on the playlist. I’d like to tell you it was something inspirational like ‘Born This Way’, by Lady Gaga or ‘The Way You Are’ by Bruno Mars because that would have been terribly ironic and a bit sappy, but it wasn’t.  When the next song started I felt her stare again, look, and then look away. I was losing patience and suddenly felt so small. Thankfully, my stop arrived moments later. I was able to shuffle off of the train, wishing I could be another anonymous face in the crowd, but instead I knew I stuck out like a sore thumb. 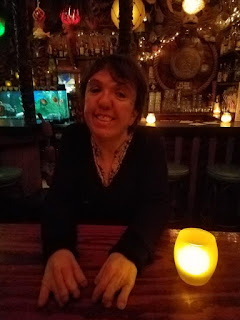 Normally the “stares” don’t bother me.  Today it did. Like I said, when I’m on the move I don’t even notice them.  There is quite literally nothing I can do to change the way I look. Sadly, we live in a society where if you look slightly uncharacteristic than the rest of the population you are an anomaly that deserves every gawk, gape, stare, and judgment that’s sent your way.

I found myself in a funk for most of that day.  This state was a personal struggle. I don’t like to live in “Funkville.”  I am overall a fairly happy person, approachable, laid back, and friendly. But that day, I was in a funk.  I didn’t really want to talk to anybody. I was moody. Annoyances found me at every task, and well, I was just sad.  A lump lived at the back of my throat, taunting me to start weeping at any given moment throughout the work day. I couldn’t. I needed to be professional, I needed to stay composed and focused.  Bursting into tears in front of co-workers would ironically make me look…weird! I reached out to my partner towards the middle of the day. He’s literally one of the only people on the planet I know who knows how I feel. He too has Apert syndrome.  He’s been on the receiving end of the stares, the gawks, and the whispers. He’s felt the hurt. It’s literally the foundation of our relationship. He, of course, was comforting. Finding himself in similar or identical situations, he was able to empathize and agreed that this was indeed “Funkville” and it was okay for me to stay there. He validated my feelings. Sometimes that is all we really need to make it through tough emotions. 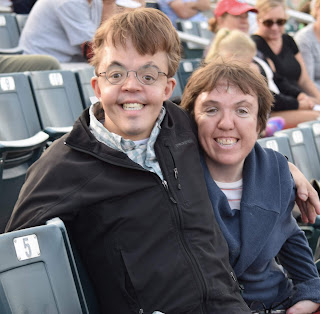 The next day came, and so did the stares, as expected.  For some reason I didn’t find myself as effected, but there they were, and there they will continue to be.  Knowing that I can let those beady stares roll off my back is a comfort, but knowing that I can travel to "Funkville" for solace is almost as redeeming.